Take me, Bring me

'Take me, bring me' is a participatory sound installation reflecting on the vulnerability of our senses and position of helplessness in the context of a military conflict. Employing a 5-channel system of tactile speakers and a military stretcher used for rescue operations this installation takes visitors on a sonic trip. It encourages in-depth listening through your body, engaging with both audible sounds and vibrotactile stimulation. For every visitor, this sensory journey can be experienced slightly differently depending on the individual choice of a dormant position.

In 2017 I took a train from Kyiv to Sloviansk, a small town in Donetsk Region. In 2014 the nearest local airport in Luhansk was destroyed in the conflict between the Ukrainian forces and the separatist groups from Eastern Ukraine supported by Russia. The battles over that airport were all over the news and YouTube, captured by mobile phones of conflict witnesses. The airport is still in ruins. But there is an old post-soviet night train instead. It takes 11 hours to do that journey, most of it you should be sleeping.

The reality is different. The banging and groaning sounds of carriage metal parts were so severe that I could feel material vibrations with my whole body. For me, that journey has become a painful symbol, a reminder of the destruction that political and military conflicts bring into the normal flow of life. Laying on a train shelf, feeling the resonance of metal parts banging against each other, I was carried away by the force which was too big to resist.

Later on, the sound recordings I made on the train became a metaphor for the violent conflict, a soundtrack that uses no words. To create a space where the in-depth listening experience happens, I acquired a decommissioned military stretcher from NATO supplies. Employing the original physical qualities of this object, I equipped it with a multichannel set-up for tactile sound using various audio transducers, attached to the stretcher and outside of it on different materials (metal, wood, hard plastic). A padded membrane filled with buckwheat underneath the laying surface helps distributing the vibration more evenly across the stretcher. Laying positions are chosen individually by each participant. Depending on chosen position, various aspects of vibrotactile sensations can be felt in different body parts (back, abdominal area, limbs, joints, and scull, etc.).

The 5-channel multilayered composition consists of original field recordings from the train and audio bits extracted from YouTube videos. These videos have been shared by the conflict witnesses in 2014-2015. To emphasize embodied listening approach, for this sonic experience, I keep the ears of the participants open and use bone-conducting headphones, attached with medical tape just outside the pinna of the ear. As a result, the audible sonic stimulation fuses together with the accidental sounds shaped by the acoustics of the exhibition space and the audience, together with vibrotactile sensations creating an immersive total experience.

'Take me, bring me' can be experienced in one-on-one listening sessions of 15 minutes. Set in the shape of a sonic installation, it is performed for each visitor individually In this set-up I take a role of a host, greeting every participant, assisting with getting on the stretcher, putting on a sleeping mask and bone-conducting headphones, guiding them through the choice of positions, as well as an after talk by the end of the session.

Besides the individual participant level, this work also has qualities of a public performance: when the audience has access to a part of the soundtrack audible in the space, while observing a human body laying on the stretcher in a dormant mode. 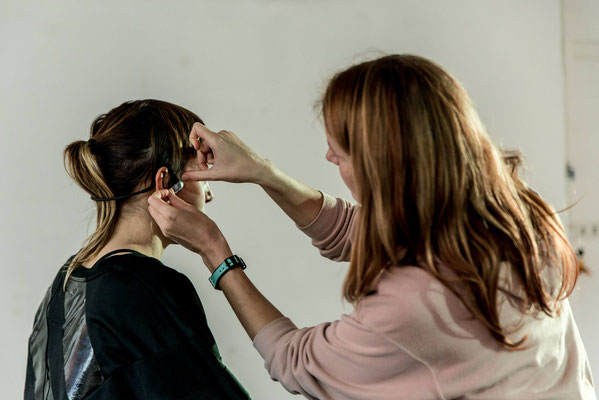 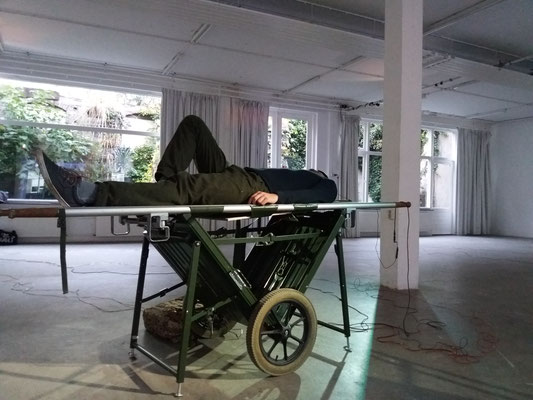 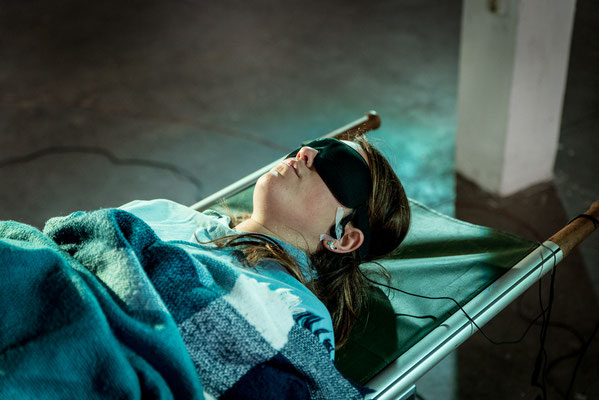 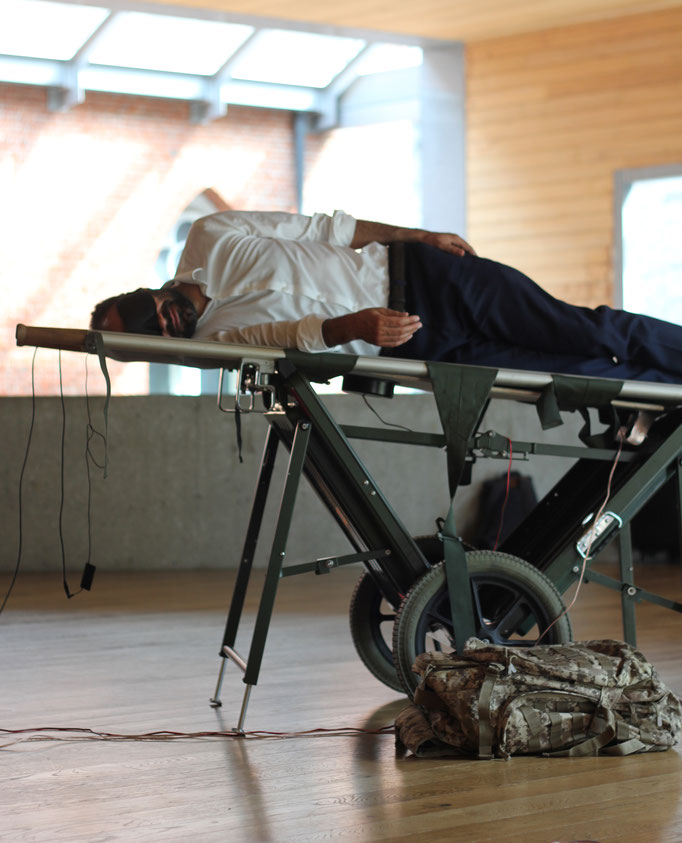 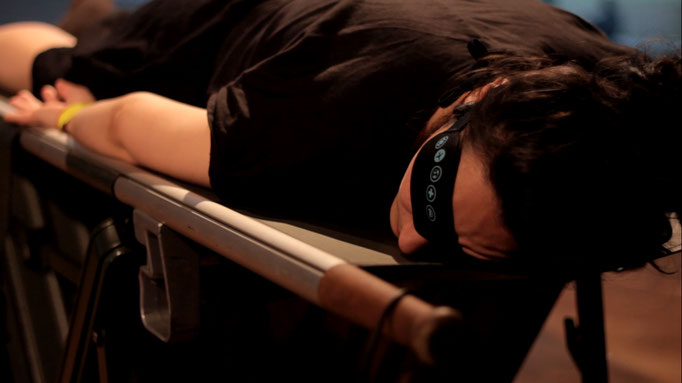 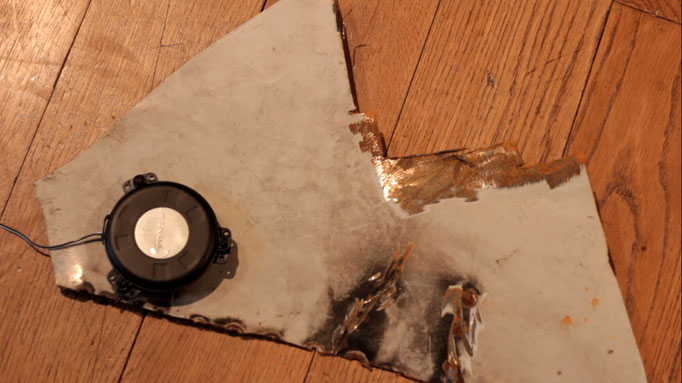 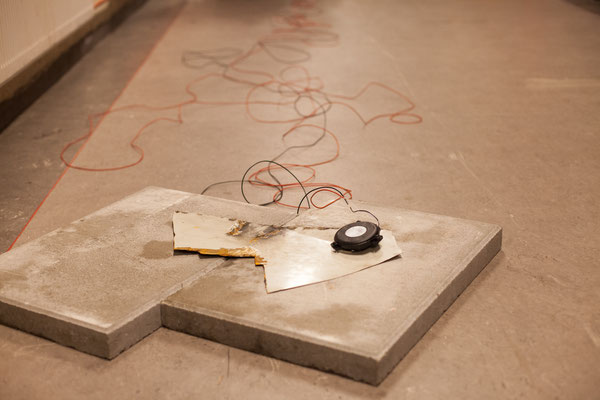 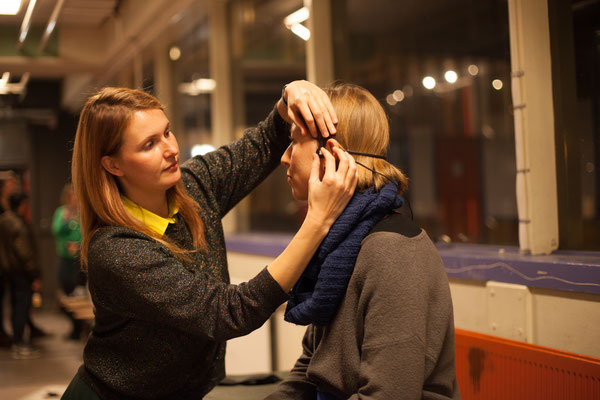 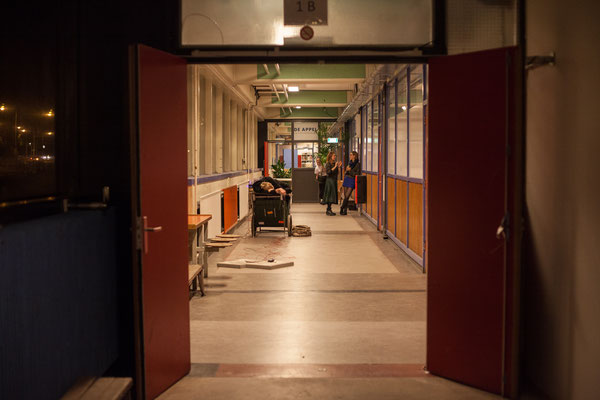 The development of this installation was possible thanks to technical advising and support from Overtoon (Brussels) and De Bijloke Music Center (Ghent). This project was generously supported by Mondriaan Fonds.